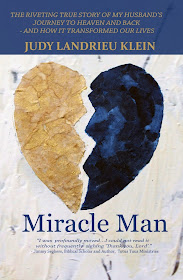 I read “Miracle Man” in two and a half  days!  Normally, books take me a lot longer to read, but  I couldn’t put “Miracle Man” down.

“Miracle Man” is the true story of a man named Bernie and the fulfillment of God’s plan for him and his family.  Not what was expected or wanted, the journey directed by God affected not only Bernie and his wife, Judy, but countless other lives of people who came to serve.

Prior to the start of the book, tragedy had touched both the lives of Judy and Bernie, tragedies that many people could not survive. Both had lost children, however, in spite of these tragedies, Judy and Bernie stayed the course of their faith and marriage. When tragedy again reared it’s ugly head, God intervened, and His graces poured forth.  Bernie’s heart kept beating in spite for the dire predictions of doctors and medical professionals.  Surprise, God was in charge!

At the beginning of this spiritual journey, Bernie was a lukewarm Catholic. Lukewarm Christianity is not what God intended for this family.  He wanted them to embrace Him and His plans for them, not in their time or in the way they would have liked, but in His time and in His way.  By learning to trust God and follow in His paths, Bernie, Judy, and the rest of the family came to know and love God in ways no one could have ever dreamed.  Their love for God touched many lives that would not have been touched otherwise.  Their spiritual journeys developed, and God touched their lives.

Always close to death, but surviving, Bernie became known as the Miracle Man by medical staff in the hospitals in which he would be placed.  However, this was not the important part of  Bernie and Judy’s story.  “Today, Salvation has come to this house…” Luke 19:9.  The Hand of God reached down and touched the souls of Bernie and Judy and brought forth the best in both of them as they opened their hearts and souls to God’s Love and began to trust Him completely.
As difficult as the journey became, Bernie and Judy’s spiritual hearts were captured by God, and they persevered.

If I had to sum up the important elements of this book in two words, they would be:
Trust God.

When Bernie and Judy began to trust God completely, their lives changed.  No, the outcome was not what they wanted, but it WAS what God wanted in the end.  Souls were saved.  Lives were touched that would not have been changed otherwise.  What seemed to be an impossible outcome, was not.  God was in charge.  Miracles happened.  Bernie journeyed to heaven and back.  God’s generosity could not be outdone.  God affected the change.  Bernie and Judy accepted God’s graces.

As Bernie and Judy learned, one of the greatest miracles comes in not being alive each day, but in living each day to its fullest for the greater honor and glory of God!

I loved this book!  God touched my heart through the lives of Bernie and Judy.  I learned there is hope in everything that God does or gives.  Praise God!  Trust God!  Hope in the Lord!
rosebud101 at 5:00 AM
Share